The Cathedral of Thorns, situated in the garden of Landhuis Bloemhof, is a breathtaking piece of art that captures not only the local hearts, but also gains recognition in international media, already mentioned by the National Geographic as a must see. This stunning immense artwork, created by artist Herman van Bergen, reveals a deeper meaning and tells a story to its visitors to reflect on lessons from the past: “the ecological and humanitarian disaster caused by the exploration of the New World.” Constructed completely from thorns of the local wabi plant as a tribute to the history and people of Curaçao, it appears the thorns change to gold when lit from within. 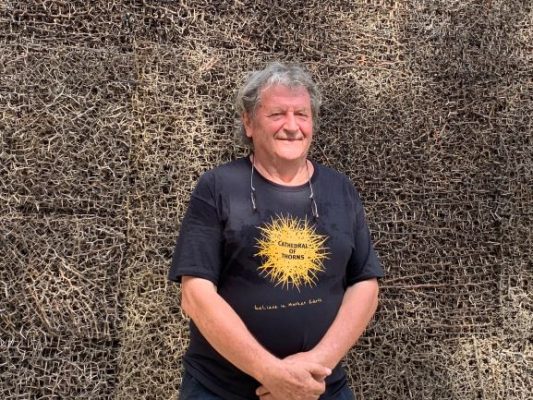 It is a building-sized illuminated labyrinth where visitors walk through its corridors to experience an artistic journey through a difficult history; the 18th century arrival of colonialists and the exploitation of slaves. The labyrinth design becomes a symbol for spirituality and a path to enlightenment. The realization of the Cathedral of Thorns was made possible from impressive community work, passion for art, love for Curaçao and high dose of creativity. As its growing popularity attracts visitors from all over the world, overtime could the Cathedral of Thorns become a symbol of Curaçao? 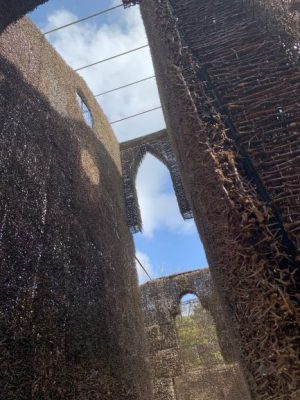 An interview with Herman van Bergen, the force behind this artwork became quite a deep conversation about Curaçao’s history, an eye-opener about humanity and recognition on the importance of collaboration. “It took me 10 years to finish the Cathedral of Thorns, an artwork that consists of more than 25 million thorns. This process is a combination of building a scale model, fundraising and intense physical work. This is how my passion and my determination became my purpose,” he mentions at the beginning of the interview. 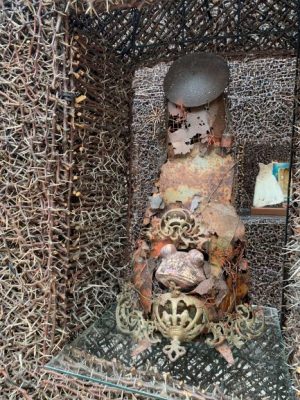 Herman van Bergen, a versatile visual artist from Nijmegen, the Netherlands, relocated and began a new life on Curaçao back in the 90’s. On a daily basis, he took long walks and was confronted with the island’s nature and wilderness, gaining an interest for the local vegetation like indju, anglo, cacti and wabi. “During this time, I looked up the reason behind the pain caused by the thorns every time I went for a walk. Was this a consequence of European colonialism? The marine research and nature management foundation CARMABI and other scientists confirmed my suspicion. During colonization, a large-scale logging of the wayaca tree took place. 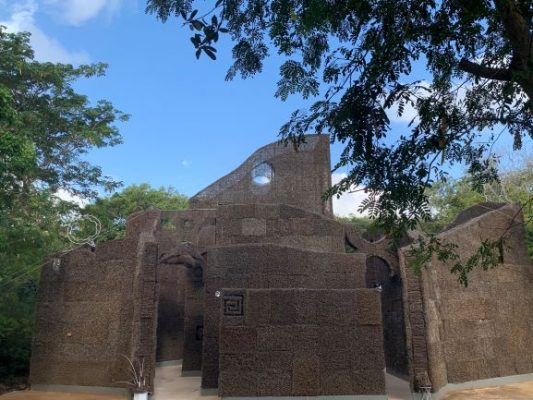 The hard wood turned out to be very suitable for shovel masts, pulleys and ball bearings for iron propeller shafts. After cutting the wayaca, the wabi was able to proliferate unimpeded. This artwork symbolizes a fight against today’s biggest threat: the destructive pollution by humanity; how in spite of it all, the thorn shrubs still thrive. My encounter with Curaçao’s barren soil brought me to the idea to start working on an art project made of thorns. I contemplated series of sculptures created from this remarkable material that would tell the many aspects of a turbulent history while honoring the power of nature and creative spirit.” 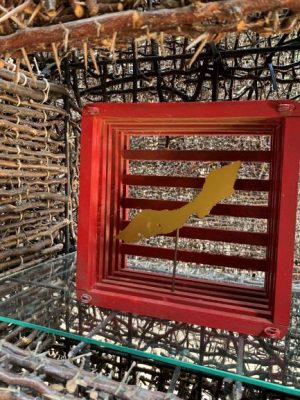 Van Bergen’s work invites viewers to recognize the beauty in what is usually considered unattractive. His paintings, sculptures and installations are directed at finding the unfamiliar or the mystical in the ordinary. In 2016, van Bergen received the Cola Debrot Award, Curaçao’s most prestigious national award in culture and arts for his contribution to art development, education and awareness on the island. Van Bergen’s first work was a tall thorn tower that resembled the Greek god Atlas which was first exhibited between two strong paintings inspired by Francisco de Zurbarán’s Saint Serapion, depicting religious power. 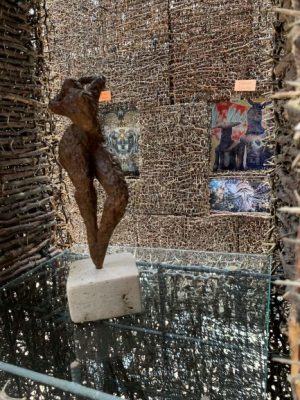 One of his most famous pieces is ‘Nature’s Kiss’, a gift to the Dutch King and Queen on behalf of Curaçao in 2013.  In 2015, he sculpted heads, torsos and objects, such as ‘Harvest’ and ‘Useless Islands’. The multidisciplinary artist is known for his watercolors and oil paintings, but his thorn art definitely has made a statement. His sculptures and lamps made of thorns create unique atmospheres in houses, offices and buildings, and have regularly been selected for prestigious art exhibitions in Curaçao, the Caribbean, South America, the U.S. and Europe. The Cathedral of Thorns became a new milestone in Herman van Bergen’s career. 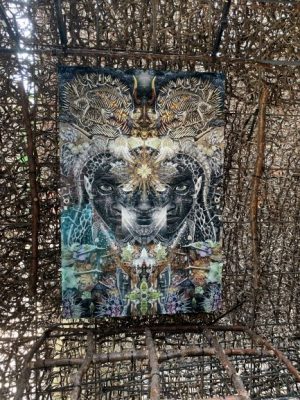 The Cathedral of Thorns includes symbols of today’s world religions and ancient nature-based religions. There are embedded religious symbols to show the hidden meaning that people with different beliefs can live peacefully next to each other. The walls have niches containing objects of contemporary art by fellow artists, focusing on mankind’s ability to change, share and collaborate through creativity. “The Cathedral of Thorns is homage to our first inhabitants, focusing on the misbehavior of humanity and free spirit as the only way to a hopefully better world. The thorns symbolize our bad way of treating planet Earth and the way we treat each other. Visiting this cathedral will definitely make you reflect on lessons of the past, the power of nature and the influence of creativity,” Herman comments. 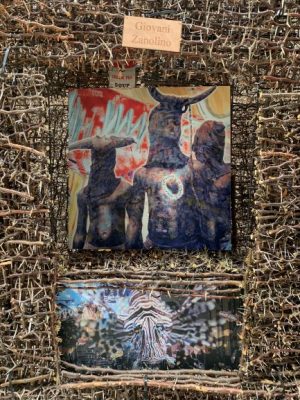 Additionally, the Cathedral of Thorns stands for community work and has been a community awareness project that gave disadvantaged young people a second chance to be part of society. “We work for the future generation. With a contribution from Fundashon di Artista and Reda Sosial, less fortunate youngsters received the opportunity to work and express their creativity. 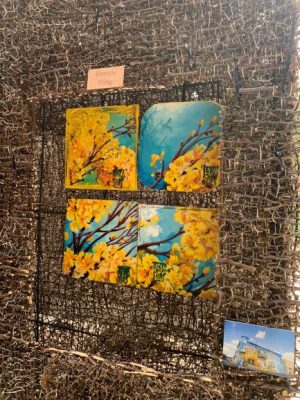 Fundashon di Artista supports local artists by creating awareness for the crucial role of art in every society. Reda Sosial is committed to fighting poverty in Curaçao by financing projects that brings relief to the living situation of the less fortunate, promote their self-reliance and aim to enhance social and economic development. It’s important to teach these youngsters not to be dependent on the government. It is possible to create something out of nothing. We showed this with the Cathedral of Thorns. Curaçao’s most complex vegetation was turned into gold,” he continues. 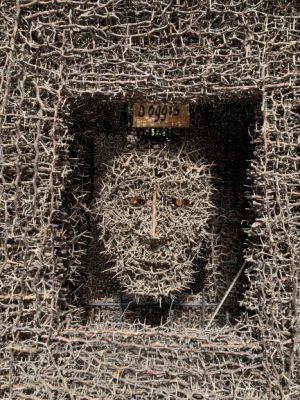 Besides the great acceptance from local inhabitants, Herman receives visits of international tourists on a daily basis. One of his future goals is to create a collaboration with the Curaçao Tourism Board (CTB) and Curaçao Hospitality & Tourism Association (CHATA) to start promoting the Cathedral of Thorns as a must visit. “It’s becoming a routine for me to tour visitors around” he says with a smile. “Most visitors are from Europe, North and South America. Curaçao has so much more to offer. Next to the beaches, we have culture, history and now a unique piece of art that is already gaining international attention. It’s one of the most original art pieces in the world, that not only focuses on thorns, but brings an educational and inspiring message to the visitors. The Eiffel Tower is a symbol of France. The Tower of Pisa is a symbol of Italy. Will the Cathedral of Thorns one day become a symbolic monument of Curaçao?”