Through the years, the United States (U.S.) and the islands of the Dutch Caribbean have built strong bonds and consistently partners on topics in government, trade, education and security. The U.S. Consulate General works to strengthen the people-to-people connections.

In June 2019, the U.S. Consulate General in Curacao announced the appointment of Mr. Allen Greenberg, a career member of the U.S. Foreign Service, as the U.S. Consul General to Curacao and U.S. Chief of Mission to Aruba, Bonaire, Curacao, Saba, Sint Eustatius and Sint Maarten.

Prior to his assignment in the Dutch Caribbean, Mr. Greenberg was the Director of Haitian Affairs in Washington, DC since 2017. Previously, he served as the Consul General in Osaka, Japan. Prior to that, he was Director of the Office of Foreign Missions in Houston, Texas from 2012-2014, and Consul General in Krakow, Poland from 2009-2012. In addition, he has had other overseas assignments in Russia, Cuba and Morocco. Impressively, Mr. Greenberg speaks French, Spanish, Russian, Polish and Japanese. Maybe in a few months, he will even add Papiamentu to this list.

I had the honor to interview Mr. Greenberg regarding his vision on Curacao and possible improvements or opportunities for the island. 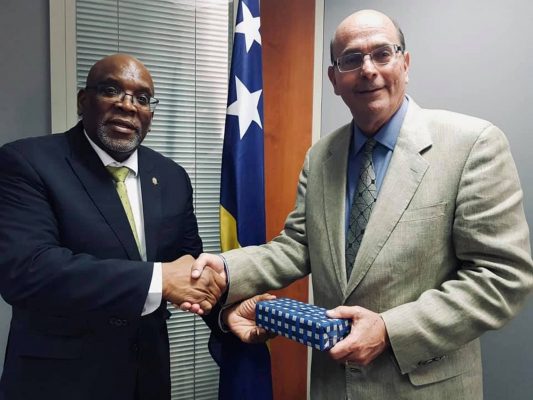 When you were assigned the position of Consul General to Curacao, were you already familiar with the island?

I first visited Curacao as a tourist with my family in 1994. We were then posted in Havana, Cuba. The USSR, Cuba’s long-time benefactor, had recently collapsed, and Cuba was in the throes of the so-called “Special Period in Peacetime” when all goods and services were in extremely short supply. Censorship was strict and individual rights suppressed. Curacao, with its prosperity and its freedoms, seemed like a gem of the Caribbean. We had a wonderful time visiting then, and so were thrilled to be able to come back to work and live here now.

What are your thoughts of the island now that you have been living here for a few months?

We have confirmed that Curacao is a gem indeed, and for more reasons than we imagined during our short vacation visit. What makes Curacao so special? I would say above all its success with diversity. The island is a genuine crossroads for people from Europe, Africa and the Americas, with other valuable contributions from China, India, and the Middle East. Curacao seems to bubble over with diversity everywhere you go. That’s a strong starting point. The economy of the 21st century will draw on that diversity, on an educated, multilingual and flexible workforce. Global communication and trade will need that fundamental diversity that comes naturally to Curacao.

In your opinion, where should Curacao put its focus first? What is an item that needs improvement here?

Curacao needs to embrace more people who are interested in contributing. Newcomers with skills who want to participate should be welcomed. And it’s very important that the many talented young people from Curacao who have left the island for study or work feel the door is open for them to return. Curacao needs to be sure there are no needless regulatory barriers or resistance in society to having these sorts of people invest here, whether it’s capital or technical know-how, business expertise or simply the willingness to pitch in and work hard.

Last September Magaly Garcia, Caribbean Regional Director in the Office of the U.S. Trade Representative, provided Curacao government and business leaders an overview of the Caribbean Basin Trade Partnership Act (CBTPA), a U.S. trade preference program. She described the program’s benefits, which include the possibility of duty-free shipments to the U.S. Curacao is one of the partner nations of the program, and therefore, may potentially benefit from CBTPA through duty-free access to the U.S. market for most goods.

In addition to Director Garcia’s visit, our consulate hosted two speaker programs in 2019. One of these was with travel industry entrepreneur, Terry Jones, the founder of Travelocity and Kayak. He spoke to entrepreneurs and students in Sint Maarten and Curacao about the future of tourism, and how countries need to embrace technology and change to be competitive in the coming years. We will sponsor him again to participate in the e-Aruba entrepreneurship program in June. We will also sponsor an artist/filmmaker for the Curacao International Film Festival later this year who will train aspiring filmmakers in using smartphones for commercial films. Curacao has a highly creative population, as well as a great potential for film production locations, and promoting film can be a powerful catalyst for economic growth.

We strongly support the American businesses now on the island, as well as the American Certified Public Accountants Association, and we urge others to explore opportunities here. Last fall, we hosted a group of more than twenty investors from the Miami Beach Chamber of Commerce who were interested in possible projects in Curacao. Earlier in the year, we partnered with Curacao and the Netherlands on the Global Entrepreneurship Summit (GES), including a week-long event here in Curacao called the Road to the GES. During this event, hundreds of businesses and startups attended practical workshops to help them succeed and many were exposed to potential financial backers. We are always looking for new ways to do more.

Looking at the current situation on Curacao, do you have recommendations to help the island thrive again?

Sustaining a strong emphasis on transparency and rule of law is critical for a healthy economy. Curacao’s strong judicial system is a key asset in attracting business.

And then promoting entrepreneurship will be key. Curacao, Aruba, and Sint Maarten all participate in the exciting Young Leaders of the Americas Initiative (YLAI), a competitive program we manage from the consulate which sends promising young people to the U.S. and sets up a mentoring network across the hemisphere. So far, a total of 12 young entrepreneurs from Aruba, Curacao, and Sint Maarten participated in YLAI, and four more will travel to the U.S. this year. The YLAI impact on the islands is actually much larger, because many of the candidates who did not travel continue to participate as voluntary members of this active and growing Western Hemisphere YLAI network. 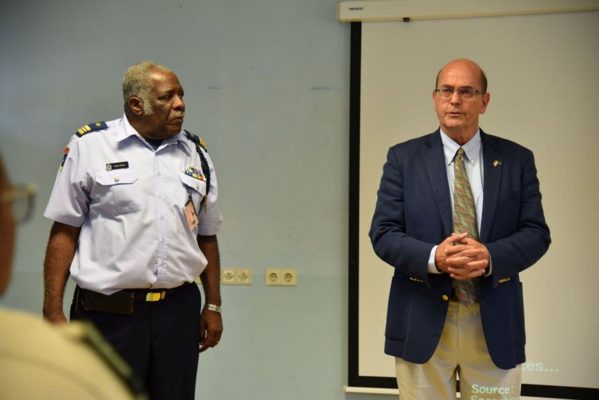 Should Curacao start thinking bigger or focus on getting the details right first?

Both. I know that is easier said than done, but really both are vital to success.

As for long-term vision, I feel a powerful sense of commitment and dedication with Curacao’s Governor and political leadership under Prime Minister Rhuggenaath to solving the island’s economic challenges and moving forward on a path of sustainable growth. We have been very pleased to partner with the Ministry of Economic Development on a number of efforts, and Minister McWilliam has been a very dynamic and positive advocate for Curacao’s potential. Among the promising sectors I have noted in my few short months here are the growing tourism market and the possibilities for renewable energy.

Vision alone will not suffice of course. Details – or we could call them real world facts – do make a huge difference. Curacao, like all economic entities, needs to constantly re-evaluate and update the rules and policies that underlie the island’s economy to be sure they fit the realities of today, and can prepare Curacao for the demands of tomorrow. The educational system needs to keep pace with, and where possible foresee, what young people will need for the next decades of the 21st century. At the same time, government, the private sector and NGOs must work together to ensure that economic goals are consistent with the long-term health of the natural environment. Curacao’s natural beauty and healthy outdoor opportunities are obviously key to success in the tourism sector. Getting these “details” right is vitally important, while keeping the long-term vision in our sights.

In summary, the U.S. has a clear stake in the prosperity of the Caribbean; promoting economic growth in the hemisphere is a high priority of the U.S. Government. The gem island of Curacao can be a key to that prosperity. Let’s work together to make it happen.