“Nos a yega leu, pero nos ta leu for di kla!”, as said by Coraline Kooistra, president of the Foundation Against Child Abuse and translates to “We came from far, but we are far from done!”

The Crisis Bank was formed by the Foundation Against Child Abuse in response to the Coronavirus pandemic that paralyzed the island and world. It is an initiative that provides help to less fortunate families in bad situations, who are now experiencing even more difficult times as a result of the COVID-19 crisis. Since its initiation, the Crisis Bank has supported and became a savior to many people in need. The effect of the crisis on the island has been devastating and the work of the Foundation each week is critical.

The Foundation Against Child Abuse is a nonprofit organization incorporated 12 years ago, with the main mission to help families and protect those in need. With the unexpected hit of COVID-19, the Foundation felt obligated to urgently form a response team. The Foundation was acutely aware of the food shortages in certain communities and growing threat of hunger by families with children.

Coraline Kooistra elaborates on one story, an example of the situations the Crisis Bank regularly gets confronted with: “It was very late one night, when I received a call from a desperate woman. ‘Ma’am, sorry to call you now, but I need your help. I just received your phone number from a neighbor that saw you on Facebook. I actually want to ask you for food. We already are out of food for a week now. I have a 12 year-old son and a 6 year-old daughter. My husband lost his job and we have nothing left in the house.’ Initially I asked her if it was something that could wait until the next morning as it was so late already, but when she started to cry, it broke my heart. I could hear in her voice that she was having a hard time. She asked again if I was sure there was nothing I could do at that moment. I asked where they lived and she answered in Seri Kandela, about 30 km away.

I thought … it’s after midnight, a woman all alone on the street, but I always have extra food at home in case of emergency and my thoughts went to those kids with empty stomachs. I have experienced it myself, so I knew exactly how it felt but for children, it is worse … they are helpless. They are completely dependent on their parents. The worst thing that can happen to a child is going to bed on an empty stomach or going to school without food. There are too many cases like this in Curaçao at the moment.

It was bad already, but with COVID-19, it got even worse. Reconsidering everything, I told the woman I would come and be there in half an hour. She started to cry, and I also got tears in my eyes. When she thanked me, I heard her husband’s voice in the background. He said with joy, ‘e ta bin? ahh … danki Señor!’ (She is coming? Ahh… thank you God!). When I got there, they were already waiting for me at the gate. ‘Are you coming to bring us food?’, was what the little girl asked. I told her I would bring more food and some toys too. The kids looked awful; weak, thin and with dark circles under their eyes. This is neglect. Neglect by the country! On the way home, I thought of the kids and the father who once had a good job. How difficult not to be able to provide for his family. In recent weeks, we have received requests from people of all backgrounds, musicians, ex-Giro and ex-Isla, who knock on the door for food. I believe that we all need to be ready for each other as human beings, now more than ever, especially in these difficult times. Let’s do it together, please.”

During the COVID-19 period, the Crisis Bank delivered food packages to the families with the least resources and in the most deplorable situations, usually during the day, but in extreme cases as above in the middle of the night. Besides the ‘drive-by, drop-offs’ in different neighborhoods, there were also six days with massive hand-outs on location. Thousands of families were registered and able to pick up packages at the different locations. When the Crisis Bank started, there were packages with edibles only. During the last weeks, they also started handing out beds, clothes, furniture and more when it became apparent that additional supplies were needed. By now the Crisis Bank provides transport, medication and vitamins, plus in various cases resources for the family pets. 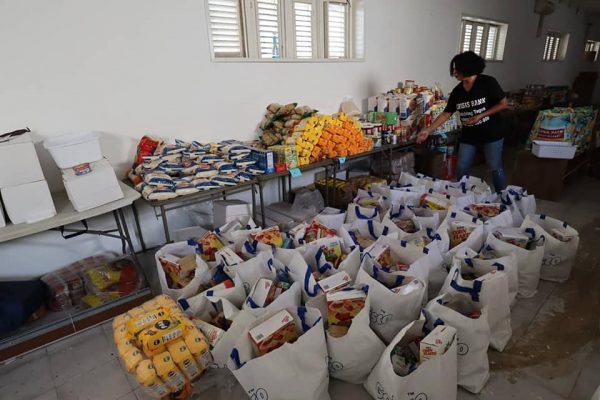 Without help all of this would not be possible. The Crisis Bank receives donations from people in Curaçao and the Netherlands. The financial support allows the volunteers to buy all items needed to make packages and transport them. Coraline Kooistra expresses, “We are extremely grateful to everyone that helps us!”

In the upcoming weeks, the work of the Crisis Bank will continue but also through their new project ‘Adopt a Family’ where people can register to help one specific family with bills and necessities. The Crisis Bank will also start preparing for the school year, in order to ensure schools receive lunch packages and if possible even school supplies for registered children in need. “Poverty often is the reason behind most crimes, by preventing this and providing needed support, we can prevent a lot of problems in our community”, explains Coraline Kooistra.

The Foundation Against Child Abuse continues to work tirelessly protecting children and women of abuse, and through the Crisis Bank, the Foundation ensures as many people as possible receive the help needed. To get involved or provide support, please contact Coraline Kooistra at (+5999) 5221235, kindermishandeling@gmail.com or via Facebook: