“I’m a tourist and a local at the same time”, Tennis Pro Jean-Julien Rojer on spending lockdown on Curaçao

Curaçao-born Jean-Julien Rojer left the island at the tender age of 13 to train in Miami. 25 years later, he plays for the Dutch national team, has won three Grand Slam finals, and currently holds a World Doubles ranking of number 21. In March of this year, when the Coronavirus began to take hold in Amsterdam, Jean-Julien and his wife made the decision to get on a plane back to Curaçao and spend an extended time on the island where he has never spent more than two weeks straight since his teens.

Three months down the line, Jean-Julien is making the most of the unplanned break from his usual punishing routine. He describes the current situation as both “a blessing and a curse”. He is out of a job for the time being, but he has been able to spend time with friends and family, go to the beach, and live a normal life. “I’m still training regularly; running and playing tennis 2 – 3 times a week”, he explains, but this is nothing like his normal regime which includes at least three hours of tennis and two hours at the gym, seven days a week. Here, the main challenge is diet and he has been taking the opportunity to enjoy the local food since the tennis season has been suspended. “To be at the top of my game, I need 4 – 6 weeks of continuous training”, he says and although not having a goal to work towards has been difficult, it’s been great for him to be able to take the time to rest. In fact, this is a trend that Jean-Julien has noticed with many other experienced tennis pros during lockdown. “The younger guys are training hard and the older guys are resting”. 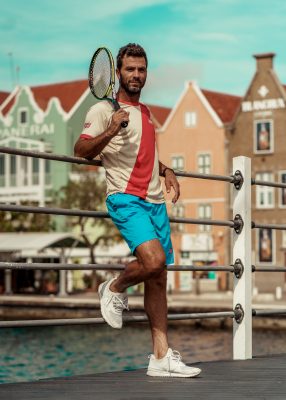 Having the chance to spend some time here has given Jean-Julien some insight into the challenges being faced by people on the island during this time. Renting accommodations in Pietermaai allowed him to feel like a tourist and a local at the same time and opened his eyes to all that the island has to offer. It has also made him conscious of how important it is that people stand together and help each other out. One way of doing this, he suggests is by local people supporting local businesses. “We should be doing this all the time, and not just in a crisis”, he says. “Simple things like making an effort to buy local products at the supermarket can really make a difference. We need to look at our shopping habits in general too. A lot of us are just so used to buying things when we are abroad or shopping online but the reality is that a lot of the time, we don’t need to go to Miami and we can buy what we need much closer to home.” The same goes for vacationing; Jean-Julien has been spending some time in Banda Abou and he comments on how beautiful it is there with incredible beaches and restaurants. Encouraging local people to have staycations and keep the money on the island is a great way to promote self-sufficiency and boost the economy.

Jean-Julien has been trying to give back to the community as much as possible while he is here on the island. He notes the great changes in the world since he himself was a young boy playing at RCC (Racing Club Curaçao). As a child, his mother would drop him off in the morning time and he would spend the entire day at the club, playing, watching, and talking tennis. “Nowadays, kids have a lot more going on; they play and leave”, he comments, so it is more of a challenge for clubs to capture their attention and imagination. The two biggest tennis clubs on the island have noticed that membership is down, and the majority of players are of an older demographic. Jean-Julien believes that the trainers should hustle to drive interest and get more younger people involved, but it is not as simple as having a court and a tennis racket. Parental involvement and attitude play a big role and can make or break the future of a young player. The real secret to success is having a passion for the sport and parents can easily smother that flame by being over-competitive and putting too much pressure on kids. It means nothing if your child is the under 12 champion as this is the time when kids are developing their game and technique and winning should not be the focus. 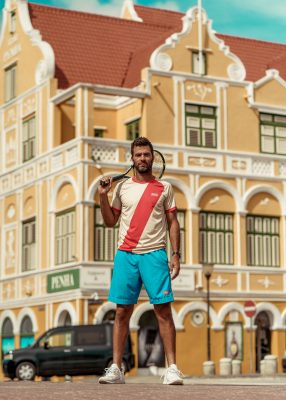 It was Jean-Julien’s own parents who made it possible for him to succeed the way that he did. His mother was the nurturing one while his father encouraged him to be the best he could be. They balanced each other out and they were always at matches to watch his games. “Agassi was my idol when I was a kid”, he tells me “and whenever they traveled anywhere, they’d bring me back an Agassi shirt or accessory. I would be so excited, and I couldn’t wait to hit the courts to show it off”. It is those little things like that which keep kids motivated. He still has the same enthusiasm for tennis now that he did twenty years ago, and it is for this reason that he is so keen on promoting tennis on Curaçao. “Growing up here, playing sports outside and running around means that kids have great hand-eye coordination and that’s why we have so many successful athletes. Sports are amazing for motor skills and social development too”. Tennis is great for teaching discipline and simple things like etiquette. “Learning to pick up your balls and say, ‘good shot’ to your opponent help promote valuable life skills that you can use off the court too”.

Jean-Julien believes it would be good to see the government invest in some better sports facilities for young people but ultimately, success is driven by the individual athletes and passion for the sport. He has dedicated an insane number of hours to tennis. It is tough, his social life is minimal, and he does not get to see his family much, but he still has the same love for the sport that he did as a child. “If you can find the thing you love, the other things don’t even seem like a sacrifice”. That is why he always tells kids, “Find your passion! It could be music, arts, sports, or whatever but find it, and then follow that light!” 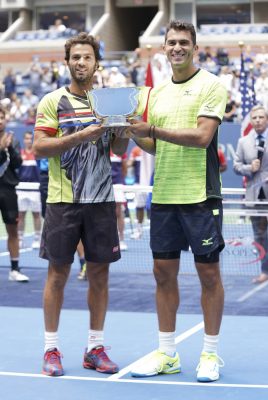